Ok, so I admit I stole the quote from Jessamyn West and this particular blog post is about Theatre in England. So why did I choose a quote from an American Quaker novelist? No reason. I just like it. 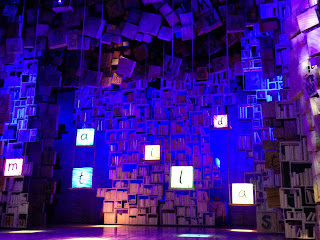 And it was awesome.

I decided last week that I wasn't attending the theatre enough and just because I didn't have someone to go with doesn't mean I should miss out. So, I got on Amazon and went rummaging for theatre tickets. (Now, there are many cheap theatre ticket venues (both online and along Leicester Square) that sell discount tickets, but like many things, I've discovered the Amazon interface to be easier, cheaper, and clearer to use.) That was a long aside.

Anyway, I purchased tickets for Matilda for today and Aladdin for February. They were both the cheapest tickets I could purchase. Yay me!

Anyway, I get to the Cambridge Theatre before the show starts and ask for my ticket at the roll call and the ticket man was nice enough to upgrade my ticket - from a restricted view seat in the nosebleeds to... 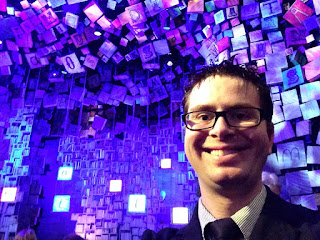 Here I am taking a (very bad) selfie from the eighth row! Score!

The show was amazing. I think my favourite part was the choreography on the first school number. I liked how the incorporated Matilda's story into the life of Miss Honey and I really enjoyed the kids...except maybe Matilda. Matilda was a very good singer and was cute - but she yelled every line and was angry the entire time. Mind, her upbringing was a bit trying, so I guess if fits, but still I was picturing more...Mara Wilson-like softspokenness. The iconic 'My Mother Says' song at the start was very enjoyable too and the man playing Trunchbull was hilarious.

Matilda was the fourth show I've seen on the West End and seventh in the UK.

The first show I saw since moving here was A Dream at the Crucible Theatre in Sheffield. How I got in was amusing. I was at a work conference, a week after moving here, and I was walking around Sheffield a bit and noticed the theatres. Chitty Chitty Bang Bang was way too expensive and the Lyceum, so I went a bit further to the Crucible and noticed there were a ton of people milling about. Asking the ticket lady what show was playing, and asking how much tickets were, I was discovered it was press night and they weren't selling tickets to the show. She asked, however, if I was alone, then nipped around the back and returned with a ticket for me. Free show! Sign me up. So, I randomly jumped in to see a show.

This was a community theatre piece that took several Shakespeare plays, mixed them together, and modernized them so that they took place in a hospital. It was surprisingly good, though the singing wasn't anywhere close to typical Utah theatre standard. Utah spoiled me for good theatre. (Fortunately, England is also ridiculously talented - there is a professional theatre (or two) in pretty much every city. This is a picture I happily ripped off the interweb from a review on the The Stage. 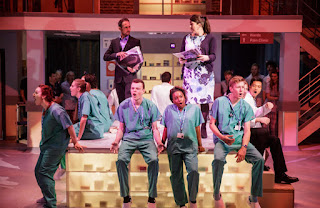 The second show I watched was on a Saturday when I was bored and decided to head down to explore London. I got off on Baker Street and everywhere I went was packed. Note to self - avoid London on a Saturday. Madame Tussaud's wax museum was packed, the Sherlock Holmes museum looked kind of dumb, and nothing was popping out. So, I decided to take a stroll in Regents Park. After walking around a bit, I discovered an outdoor theatre that happened to be having a matinee of Pride and Prejudice. It was closing day and they had two seats left. I took one.

The set was minimal (for everything else I've seen in the west end), but the acting was superb. They made it a comedy and for such a simple set, they used it rather effectively (it rotates around). It was a great show and it didn't even rain on us.

Up next was a trip to see The Wiz in the Watford Palace Theatre down the street from my work. This theatre is very small, but they did a pretty decent job. I went with a bunch of co-workers and it was a really fun show, though the hour long walk back from the Leighton Buzzard rail station in the pitch dark at midnight wasn't the most fun (they don't have street lights and any cars that pass by are rather blinding).

The next two shows I saw when Mom and Andrew came to visit. We all saw Charlie and the Chocolate Factory at the Theatre Royale on Drury Lane and then Andrew and I went to In The Heights at the King's Cross Theatre.

Charlie and the Chocolate factory had the most elaborate set and costumes of any show I've seen (up to and including Matilda). The music and acting were great. It was fun going to a show with my mother and brother in law. I was humming/singing Willy Wonka's song on the trip back home. I was very impressed with the performance and the theatre was the most gorgeous theatre I've ever been in. It's like 300 or more years old. There is just something special about attending shows with so much history tied to the venue.

In the Heights was my first experience watching a Lin Manuel Miranda show and I am so psyched for Hamilton to open here in London. The King's Cross Theatre was unique in that it has seating on two sides of the stage and not a lot of seating - kind of like a thrust stage or theatre in the round, but more a rectangle with two stage fronts. Andrew and I were in the third row or so and had great seats to see an excellent show. There was a lot of street dance and Brits do a pretty good job of playing Puerto-Rican Americans.

The final show I've seen was a good ol' English Pantomime, that is a Christmas tradition. These are fractured fairy tales for children, similar to American melodramas...except these always include at least one cross-dresser and surprisingly crude jokes (and rather overt too) that I was not fully expecting for a 'kids' show. It was really funny though and enjoyable to boo and yell at the actors along with the rest of the crowd. Ours was Beauty and the Beast and included a fight/bet between Cupid and a Wicked Witch that culminated in the Beast falling in love with Belle, Belle's little sister falling in love with Cupid, Belle's father (a candyshop owner) falling in love with the cross-dressing comedy relief candy seller, and the witch turning good.

It has been a lot of fun attending these performances. The calibre of acting is incredible. Then again, there are so many acting schools in the area devoted entirely to theatre. The daughter of one of my co-workers is hoping to get into one of these schools. They say that certain shows will go to one of the top drama schools and will enlist a class as the ensemble for a West End Show and that a majority of the roles given out will go to graduates of the acting schools here. It's quite a select little club.

And there you have it. Six months of English Theatre. Hopefully, there will be plenty more where that came from, with better photos.
Posted by David at 12:41 AM